Egg is a short story that just gets it right.

User Rating: No Ratings Yet !

Egg tells the story of a young man (Kit Clarke) who is dealing with the aftermath of losing his lover (Rosanna Adams) and the dark, ruinous thoughts that grief brings. As he stares into the ever growing dead ends of his cigarettes he finally decides to leave his flat and head out to the woods where his lover is buried. The young man contemplates suicide but is startled when he sees the image of the wolf pendent his lover always wore and a lone egg in a nest threatened to be eaten if left alone. He rescues the egg and returns home while contenting to have flashbacks to a happier time until it finally reaches a head and he must make the ultimate decision: continue to dwell on his loss and finally joining his lover in death or move on and start something new

The writing in this twenty minute long short film is perhaps some of the finest I have seen in the many years I have been doing film reviews. Many films over the years have tried to deal with the topics of loss and depression to varying effect and while most often go overboard trying to evoke feelings in the view it generally leaves you empty and uncomfortable, this is not the case with Egg. Hills and Fabbri wave a wonderfully melancholy tale that actually makes you feel the pain and heartache of the nameless protagonist in such a real way. This is especially hard when there is little to no dialog in the film and must rely on the power of the actor’s ability to emote and own the scenes they are in and also the other use of sound both of which are phenomenal in Egg.

Kit Clarke plays the nameless protagonist in the film and brings him to life in such a real way. Without a speaking line Clarke relays the grief, anger and depression that a person feels when you lose a loved one in such a detailed and realistic way that you’d think he was speaking from personal experience. This is not easy even for actors who have had decades of time to perfect their craft and nearly unheard of in someone with only three credits to their name. None of this would be possible of course without a director who is up to the challenge and Laurence Hills and Lucas Fabbri certainly qualify.

Hills and Fabbri’s use of black and white filming for the present timeline of the film was remarkable. It puts the viewer into the mindset of the protagonist and relays a sense of the brooding and sadness that he feels and when it shifts into color for the flashbacks the opposite effect is also true. The hope, happiness and life in general of these moments are perfectly felt by the audience while the music always lets you know something is off in the background and that what you are seeing isn’t real.

As far as sound and cinematography goes Egg is a master class in the field. The camera work in the film is on par with some of the best Hollywood films I have seen and each shot is crafted in such away as to make you feel like you were living in the same world as the characters. Most of the time I truly hate shaky cam effects when a character is “running” as it breaks my immersion into the film but here it is used both sparingly (which is always welcome for me) and poignantly. Each shot along with the emotive expressions of Kit Clarke brings the film to life in a breathtaking way. The soundtrack of the film is just as amazing as the visual work. The background music is almost a character in itself and clearly states what you are intended to feel during each scene and is never overbearing or misplaced.

In conclusion Egg is a touching tell that deals with a very sensitive topic in a mature and respectful tone while adding some very short supernatural elements that you may miss if you are not paying attention. This film certainly shows that you not only don’t need a huge budget but you also don’t even need dialog to portray all the emotions and drama that a true psychological tale requires. If you are a aspiring film maker that is interested in making a film dealing with trauma this is a must watch on how to do it right and respectfully and for film buffs in general this short twenty minute film is very much worth your time.

Justin is the host of Film Fervor and a passionate lover of independent entertainment. Indie films are where people can truly express themselves and Justin believes that there are too many limitations on "mainstream" movies to be able to tell good stories.
@Film_fervor
Previous The Haunted Hotel – Indie Film Review
Next Gatekeepers in the Self Publishing World 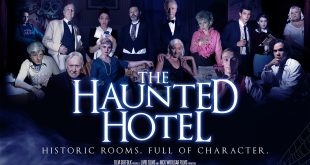