Today's film is the 2016 comedy/fantasy The Deja Vuers Directed by Chris Esper and written by Jason K. Allen. It stars Christie Devine, Kris Salvi and Craig Capone. It is presented by the Stories in Motion Production company founded by Chris Esper who offer a wide range of options to filmmakers of all kinds. The Deja Vuers revolves around a strange and homely man named Chuck (Kris Salvi) who approaches a woman sitting on a park bench and asking her if she ever had deja vu. The woman Morgan (Christie Devine) assumes it is a pick up line and immediately…
The Deja Vuers – Comedy/Fantasy Indie Review
The Deja Vuers – Comedy/Fantasy Indie Review
Kevin Kincaid

User Rating: No Ratings Yet !

Today’s film is the 2016 comedy/fantasy The Deja Vuers Directed by Chris Esper and written by Jason K. Allen. It stars Christie Devine, Kris Salvi and Craig Capone. It is presented by the Stories in Motion Production company founded by Chris Esper who offer a wide range of options to filmmakers of all kinds.

The Deja Vuers revolves around a strange and homely man named Chuck (Kris Salvi) who approaches a woman sitting on a park bench and asking her if she ever had deja vu. The woman Morgan (Christie Devine) assumes it is a pick up line and immediately goes on the defensive but as the two trade insults they also find they had similar dreams. While completely uninterested in each other sexually Chuck proposes they sleep together which causes Morgan to fall into a hysterical laughing fit. Chucks continued advances are halted by the abrupt appearance of Morgan’s great great great grand father Elias (Craig Capone) who traveled forward in time to warn Morgan she could do much better. With this startling revelation the two quickly try to find meaning to their dreams and what their future might hold.

I have to admit that I didn’t expect much from a independent short comedy film as my recent encounters with the genre have left a sour taste in my mouth with their poor quality, this was not the case however with The Deja Vuers. The film opens with a jaunty little tune and crazy title screen that hearkens back to the early to mid nineties Sitcoms such as Friends and shows like Charmed. From the moment that nostalgic moment hit my ears I was hooked and immediately was very enthusiastic about this film and what is more my enthusiasm was well rewarded. The story of the film is absolutely terrific and had me smiling throughout the entire ten minute run time which almost never happens to me. It’s not everyday you get to have a time traveling ancestor come forward in time like it is a simple thing and warn off your descendant that the guy currently trying to get in your pants is a loser, and what is more the guy agrees with him. The comedic timing of the actors is just a joy to watch and the dialog is organic and fun and really makes you delve deep into the story.

The actors on the film perform their rolls flawlessly. Kris Salvi’s Chuck comes off as slightly obnoxious yet has his own homely charm to him as he self depreciates about his many flaws to Morgan and then opens up on her physical qualities that he finds hideous. Christie Devine’s retorts as Morgan are just as quick and flawlessly executed as Salvi’s and she comes off as petty and startled throughout the film and Elias played by Craig Capone seem excited about the present and really off the cuff with his wit and social comments. It is just a rare outing in such a small cheap project such as this to be truly memorable, not many films of any genre can say the same.

The production value of The Deja Vuers is stunning and flawless. You can tell right away that Stories in Motion has a lot of experience in capturing the essence of a shot with their perfectly executed cinematography. The picture quality of the film is crystal clear and shot entirely on a Red Scarlet 4k camera bringing unsurpassed picture resolution and quality to this small budgeted film. Each scene is a true visual experience that has to be seen to be believed and is practically unheard of in a comedy film let alone a short film and is shot in a concise and meaningful way to really bring out the very well written story. The camera of course is steady and fixed and has no shaky cam effect or any other flaws that appear in many independent films and is just a unexpected treat visually.

The audio work of the film equals the high level of skills showcased in the visual department, this is understandable as Stories in Motion has worked on music videos and other audio heavy productions in the past. The actors are always heard with loud and clear voices no matter the direction they are facing in relation to the camera and there is absolutely no excess noise, static or audio hiccups of any kind. The sound track to the film is cheeky, fun and lighthearted just what you’d expect from a comedy romp like this. The music isn’t ever overpowering or lost to the background and really helps set the stage for the humor that the actors deliver with their stellar performances. I can’t stress enough how important this is for any film of any genre or budget, if your sound is flawed your entire film will fail because of it, The Deja Vuers offers a master class and how to do it right.

When all is said and done The Deja Vuers will appeal to all audiences with it’s smart humor and it’s surprising fantasy elements that bring this little gem of a short film to life. I advise everyone to stick around until after the credits start rolling as they take a page out of the Marvel movies and have a little bit extra at the end that really ties up the story. With it’s professionally handled title screen, utterly flawless cinematography and perfect audio work at just over ten minutes long this is without a doubt one of the very best films I have reviewed.

Check out StoriesinMotion.com for some great films. 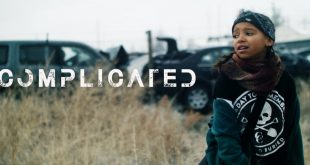 Complicated is another amazing film by the extremely talented Terrell Lamont and his production company gritHouse Films. It's short, sweet and powerful.